This Week in Career Advice: How Much Do Claims Adjusters Make?

Whether you’re asking for money, or simply curious what others claims adjusters earn, having a sense of how much you should be making is crucial to your professional well-being. Let’s review what the standard claims adjuster earns in 2017.

Know What You’re Worth: National Average 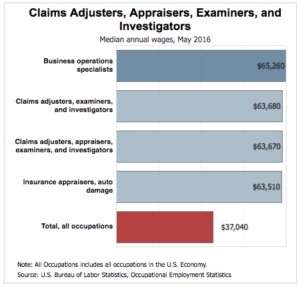 According to the Bureau of Labor Statistics, the median annual salary (ie the wage at which half the workers in an occupation earned either above or below) for claims adjusters was $63,680 in May 2016. The lowest 10 percent earned less than $37,540, and the highest 10 percent earned more than $95,760.

Know What You’re Worth: By City

Broken down by skill-level and location, the results are slightly different according to Salary.com:

Looking for a new insurance job? Sign up for a free job seeker account at InsuranceJobs.com to access the newest and freshest opportunities available. Your personal job seeker account is packed with tons of features to help you find great positions, manage your resumes, and set up email notification alerts. Get started today!